Having completed a degree in Modern Languages I then was allowed to study art!  I did my foundation year at Maidstone College of Art and transferred to Chelsea School of Art for my first degree in painting.  On graduating I was awarded a Fulbright Scholarship to be spent on postgraduate studies which I combined with a teaching fellowship at the University of Hartford, Connecticut, USA. Primarily a painter, I incorporated film and performance into my work at that time. When I finally completed my studies I returned to England and taught part-time at Swansea College of Art with the odd day now and then at Chelsea. This allowed me to pursue my own work.  Believing I didn’t know much more than my students, I abandoned teaching after two years and was lucky enough to be taken on as a scenic painter at the Royal Exchange Theatre in Manchester which led to a long and happy career as a scenic painter, designer and production manager which culminated in establishing my own scenic production company in partnership with two colleagues.  We worked on many large contracts both nationally and abroad.

For the last three years I have concentrated on re-developing my own painting.bI work in varied styles but have one goal – the exploration of the boundaries between the figurative and the abstract. I can be inspired by the natural environment, political themes or philosophical concepts. Given my background as a scenic artist, I like to experiment with a range of materials and will allow a painting to divert from my original concept and be led by the media. I don’t generally work directly from reality but will draw and photograph my observations for recording purposes and then continue from memory and imagination incorporating elements of my recorded material and always influenced and excited by the materials I have chosen to use. I try to produce something which represents an experience rather than a photographic image and ideally it will teeter on the border between abstract and figurative. 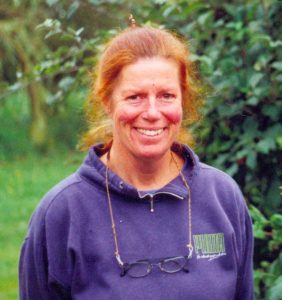